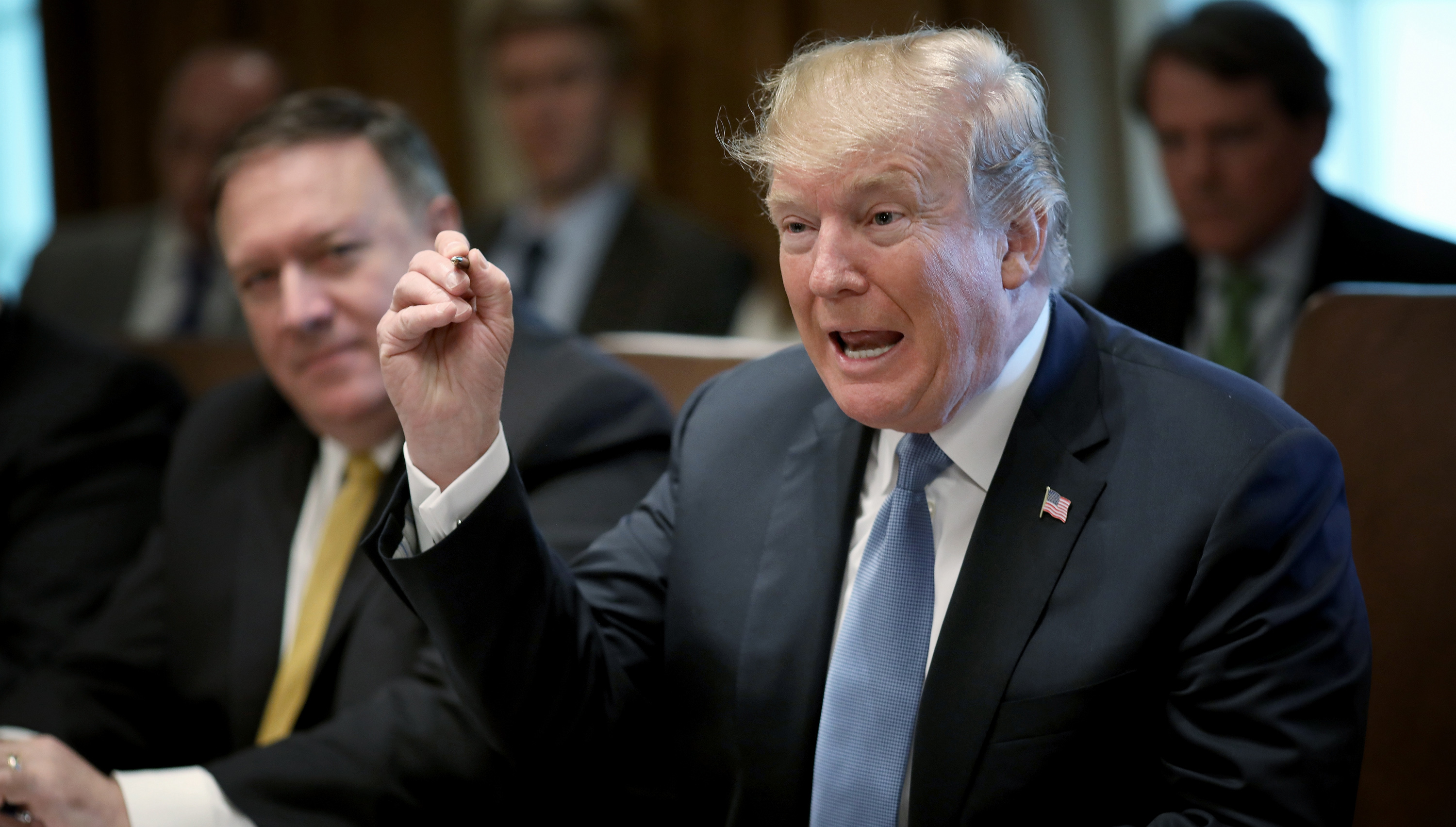 In the span of one week, President Donald Trump both warned Iran’s leaders of a calamitous response to any belligerence from Tehran and offered Tehran a “real” nuclear deal if they come back to the negotiation table. It is just the latest example of the Trump administration’s disjointed Iran policy.

Trump’s Iran policy is disjointed not because Trump’s cherished carrot-and-stick strategy is without merit or because his administration lacks the tools to bring pressure on Iran. The relatively successful resumption of U.S.-led sanctions on Iran since May 2018 (when Trump took the U.S. out of the 2015 nuclear deal with Iran) demonstrates the ability of the U.S. to sway others to do as it wants on the question of squeezing Tehran.

Instead, what is disjointed is the intended final outcome of such pressures. No one is as puzzled as the impatient Iranian opposition when they hear and see contradictory policy priorities expressed by the Trump administration. There is a nagging feeling within the Iranian opposition that Trump and his team have not done their homework about the path forward.

For weeks, the Iranian opposition eagerly waited for the Trump administration to add more teeth to its economic embargo of Iran, and it came not with a bang but a whimper. On Jul. 22, Secretary of State Mike Pompeo delivered his much-awaited speech to an audience at the Ronald Reagan Presidential Library in California, home to the largest Iranian-American community in the U.S. The location and the speech were no doubt also an effort to summon memories of President Ronald Reagan’s push against the Soviet Union.

Despite the hype, Pompeo’s performance was underwhelming. Pompeo excoriated Iran’s leaders for their corruption and human rights abuses, all well-known facts. Meanwhile, he announced a pressure campaign by the U.S. government, which will include increased Persian-language broadcasting into Iran.

But the speech raised more questions than answers, and those with serious concerns about Trump’s posture toward Iran did not find their concerns alleviated. This is despite the fact that for months now, the Trump administration has provided rhetorical support to citizens and protestors within Iran. After the U.S. withdrawal from the JCPOA, Trump tweeted out an excerpt from his speech: “I want to deliver a message to the long-suffering people of Iran. The people of America stand with you.”

Pompeo has been even more vocal in his support of the protestors, even before this recent speech. Pompeo has tweeted about Iran’s high youth unemployment, the arrests of thousands of protestors, and high spending on Iran’s proxy wars. One tweet from Jun. 27 reads, “It should surprise no one #IranProtests continue. People are tired of the corruption, injustice & incompetence of their leaders. The world hears their voice.” Such tweets consistently appeared from May through July and were sometimes retweeted by other leaders, such as Vice President Mike Pence. Pompeo made similar statements in an interview with Voice of America Persian on May 25.

Why are American officials making such statements? They claim they do not seek regime change in Iran. However, they appear to believe that if they capitalize on the anger of the Iranian people, they can gain leverage and force the regime to make policy concessions. While this could work, the strategy is more likely to collapse under the weight of its own contradictions.

The first contradiction in this strategy is that U.S. officials do not appear to know what audience they are playing to. American officials claim to sympathize with the suffering of the Iranian people, and yet also find it necessary to ban them from the U.S.; Trump’s travel ban, upheld by the Supreme Court on Jun. 26, does precisely that. This ban does not distinguish between pro-regime or anti-regime Iranians—it treats them with a general suspicion and de facto contempt, even if the Trump White House does not see it that way.

Between March and May 2018, the Trump administration issued only 139 immigrant visas to Iranians, compared to 1,270 over the same period in 2017. This is hardly a gesture of goodwill toward people that you seek to bring to your side. It is especially tone-deaf given that 83 percent of Iranian-Americans oppose Trump’s travel ban.

There is also the fact that the travel ban is baseless. Although Pompeo doubled down on the national security justification for the ban in the question and answer session on Jul. 22, analysis by those such as David Bier has shown that the administration used wildly inconsistent and arbitrary criteria to justify the policy. Trump can appeal to his nativist audience at home, or he can appeal to the Iranian people—but he cannot do both at the same time.

The leaders of Iran have and will continue to exploit this contradiction. After Trump tweeted in support of protestors in Iran in December 2017, Rouhani stated in response that, “This gentleman in America, who is now trying to sympathize with our nation, appears to have forgotten that he called the Iranian nation terrorists several months ago.” No doubt many Iranians see this tension at work in the Trump administration’s rhetoric.

The second—and perhaps more fundamental—contradiction within the Trump administration’s policy is that it does not appear to know whether they want to change the regime’s behavior or the regime itself. On the one hand, they claim that regime change is not their official policy; on the other, officials such as Pompeo present maximalist demands that prevent any meaningful engagement with the current regime.

Pompeo only muddied the waters with his speech. After a tirade against the regime, he claimed to be open to reconciliation. One Iranian commentator summed up the speech this way: “US Secretary of State: We want to end Iranian oil exports; we want to have a dialogue with Iran.” To say that this is a mixed message is an understatement. Trump’s all-caps tweet on Jul. 22 threatening to respond militarily if heated rhetoric continued did not lower the temperature. Moreover, Rouhani has bragged that he has turned down direct talks with Trump on eight separate occasions.

The debate about the wisdom of Trump’s Iran policy will be ongoing. What no one disputes is that the U.S. has now presented a significantly more confrontational stance toward Iran than it did during the Obama years. Hypothetically, this could go quite well for the Trump administration. Perhaps the Iranian people will appreciate and act on its messages, fomenting instability within the country. Perhaps this will then lead to everything the Trump administration wants: maybe Iran will give in to the 12 demands Pompeo laid out earlier in the year. More realistically, though, Iranian leaders will try to wait Trump out, hoping that a more congenial president takes office in 2020.