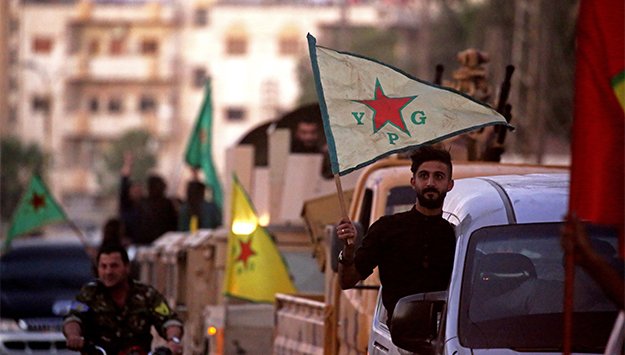 There are numerous, unmistakable signs that the crisis in Syria is moving to a new phase, one that will push Washington further to the sidelines. Not least among these fresh developments is the rapidly evolving situation in Syria’s northeast, where Washington’s Kurdish allies are slowly but surely reconciling with the Assad regime.

The area in question spans the border region with Turkey, stretching from Manbij in the west to the cities of Qamishli, Raqqa, and the Iraqi border. It comprises approximately one-quarter of Syrian territory and is rich in agriculture and oil. Since the retreat of Syrian government forces from the area in the early months of the war, the region has been under the administration of the Syrian Democratic Council (SDC), the political arm of the U.S.-backed, Kurdish-led Syrian Democratic Forces (SDF).

The region is also the last significant bastion of U.S. forces or its proxies in Syria. It hosts a military deployment and resupply infrastructure for a few thousand U.S. troops and contractors whose mission—to defeat, if not annihilate, ISIS, in tandem with the SDF—is almost complete.

Yet the successful defeat of ISIS raises a troubling question that the Trump administration has yet to answer—what next?

Washington’s alliance with the Kurds has been a success, achieving its main objective of defeating ISIS. However, today’s conflict is characterized not so much by the campaign against ISIS, which holds barely 400 square miles of territory, but by Russian and regime promotion of an “all of government” strategy to re-establish centralized regime control over all Syrian territory and borders.

The Trump administration appears reconciled to the winning strategy of its opponents, most recently in Syria’s south. There, the insurgency’s defeat has notably included the integration of some formerly U.S.-backed forces into the Syrian military, an option reportedly being explored in talks between the regime and the People’s Protection Units (YPG), the Kurdish militia that is the predominant force in the SDF.

Israel, Jordan, Lebanon, and Iraq are also making their peace with Damascus, and measures are being taken in these theaters with unprecedented Russian support to reconstitute border and trade regimes disrupted by the now-ending war.

The U.S. is having less success than other players in adapting its policy to this new environment. Washington appears stuck in a flat-footed feedback loop that highlights its continuing, if now less significant, campaign against ISIS and a diplomatic agenda based upon the moribund Geneva process. Aid for stabilization or more comprehensive reconstruction in the northeast was frozen by the White House and has now been redirected from Syria, undermining Washington’s contention that territory liberated from ISIS could serve as a model of efficiency, democracy, and reconstruction.

In contrast, adversaries and friends alike are racing ahead to assert and achieve policy objectives based upon the regime’s military victory and staying power. If talks between Damascus and the SDC bear fruit, it will knock the legs out from under what remains of Washington’s Syria policy.

The administration's new special envoy to Syria, James Jeffrey, will be hard-pressed to devise a strategy that impedes this budding rapprochement,which if successful will undermine both American and Turkish efforts to frustrate Assad's attempt to re-establish his authority throughout the country.

The Pentagon is fighting a rearguard battle to remain relevant in this new environment, suggesting an ever-changing array of post-ISIS security regimes aimed at frustrating the Russian-Syrian effort to restore regime control over all of the country.

President Donald Trump’s very visible preference, however, is to cut U.S. losses by withholding stabilization aid for former allies and deferring to the Russian-Syrian push to speed the return of refugees.

Without a workable, positive agenda of its own, Washington could do worse than simply get out of the way and permit the Kurds to reconcile with Damascus. If the U.S. is not prepared to facilitate Syria’s postwar reconstruction—and all signs point to the fact that it is not—it could follow the age-old dictum of “do no harm” and end punishing sanctions that inhibit a much-needed postwar economic revival.

In this environment, the Pentagon’s effort to consolidate wartime gains by establishing a local police and border force controlled by the SDF runs counter to the agenda that could come about if the Kurds’ rapprochement with the Assad regime comes to fruition. Such an accord, however uneasy and incomplete, is the only option available to both the regime and the Kurds, but will leave the U.S. tactically isolated and strategically adrift without reliable local partners or proxies.

The return of Syrian security and administration to the northeast has already begun. Government workers are returning to jobs at the Tabqa dam and YPG flags and pictures of Abdullah Ocalan, the leader of the Turkish Kurdish group the Kurdistan Workers Party (PKK), have disappeared from the streets. The Kurds have even suggested that they are prepared to fight—presumably with arms provided by Washington to combat ISIS—alongside the Syrian army against the Turks and their Syrian allies formerly supported by Washington in order to force Ankara’s retreat from Turkey-occupied Afrin. Without the Kurds, Washington’s allies are limited to isolated local Sunni individuals around Raqqa divorced from tribal powers that are themselves seeking to re-engage with Damascus.

Washington has read the tea leaves. The military campaign to unseat Assad has failed and the opposition cannot expect to win at the negotiating table what it has lost on the battlefield. Reports from Moscow and the region point to U.S.-Russia engagement, if not understanding, on the issue of refugee repatriation and newfound U.S. flexibility in discussions about constitutional reform.

Since almost every idea the U.S. has had on Syria—from the ill-considered demand that “Assad must go” to baseless declarations of the imminent failure of Russia’s intervention—downsizing U.S. ambitions is all for the best.

Nevertheless, old habits are hard to break. Bipartisan support for a continued U.S. military presence in the country so as to counter the regime and its allies continues to animate Republicans and Democrats alike. Such views remain strong even when they are divorced from any credible strategy.

The challenge for Washington is to understand that both the means and ends of Syria policy need to account for the failure of U.S. policy beyond the defeat of ISIS, and to plan for the future informed but unburdened by past failures.